I was Wrong about Cowan - 78 seats now possible

In my last post, I'd all but assumed Cowan would go to Labor, but in a completely unexpected twist the first absent votes have swung more to the Libs than even the postal votes. My model's now predicting it as more-likely-than-not a Coalition victory, and this is a quite conservative model as it assumes different non-ordinary vote types (e.g. absent and postal votes) will swing together. If this early trend in absent votes isn't just a fluke, it could be a very comfortable LNP victory despite being marked as a probable Labor win by analysts.

That would mean if Herbert and Flynn fall to the LNP as expected (by me, but I could easily be wrong again!), their promising Capricornia results continue on, Forde goes their way as also expected by analysts, and absent votes get them over the line in Cowan - 78 seats is now looking, if not likely, then at least far more feasible than it did last night. 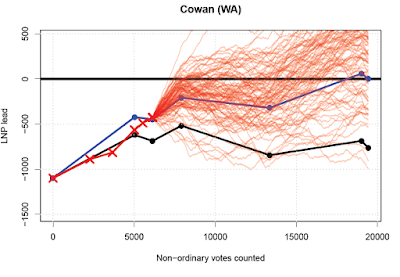