Battle of the Forde

I'd actually managed to stay away from election stuff today but it drew me back with a couple of articles from the ABC, with Antony Green and Barrie Cassidy weighing in on the situation. My prediction of 76 or 77 seats is looking pretty likely, but the thing that interested me is Green and Cassidy both suggesting that the Coalition is "on track" and "too far ahead" in Forde respectively.

Now, Herbert and Flynn look to be pretty much wrapped up for the Coalition, and Capricornia is still close but may well head in that direction after a better result their way in recent counting, giving them a likely 76 seats. That is by no means certain though, as the graph below may help demonstrate (as in previous posts, the Libs win if the red line is above the black horizontal line at the right side of the graph; current progress based on counting is red crosses; simulated possible futures are red wibbly lines; results if non-ordinary votes behave like in 2013 relative to the ordinary votes are in black; and the track needed for the Coalition to win in blue) 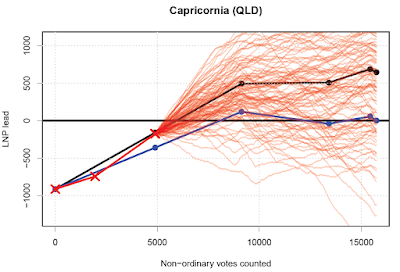 Forde, on the other hand, is looking very interesting. The Coalition is probably more likely than not to win but after a relatively strong showing by the ALP in recently counted absent votes (the downwards red kink) there's not a lot in it, and even with a few data points my simulations are still showing a lot of variation that could easily bounce either way in the remaining votes. So I'm surprised at the analysts' confidence, especially given they've been relatively cagey on other results. Maybe there's something I'm missing? 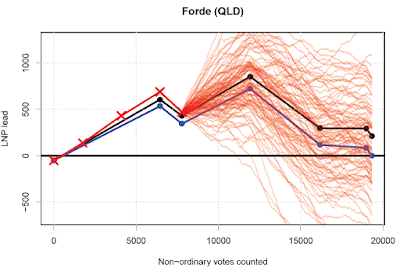 And then there's Hindmarsh, which is expected to go to Labor and is looking good for them, but it's still early days... 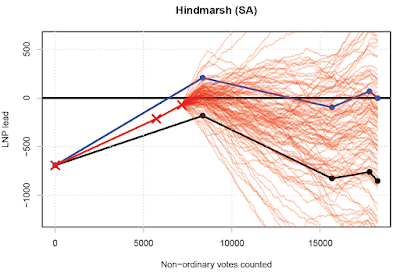 All of this together means that while the 77 seat scenario is looking likely, any result between 75 and 78 is still very possible depending on these three seats. And then the only close seat not mentioned is Cowan which is an expected Labor win but anything can still happen...
Posted by Nick at 4:59 PM